Ruby of the Nile 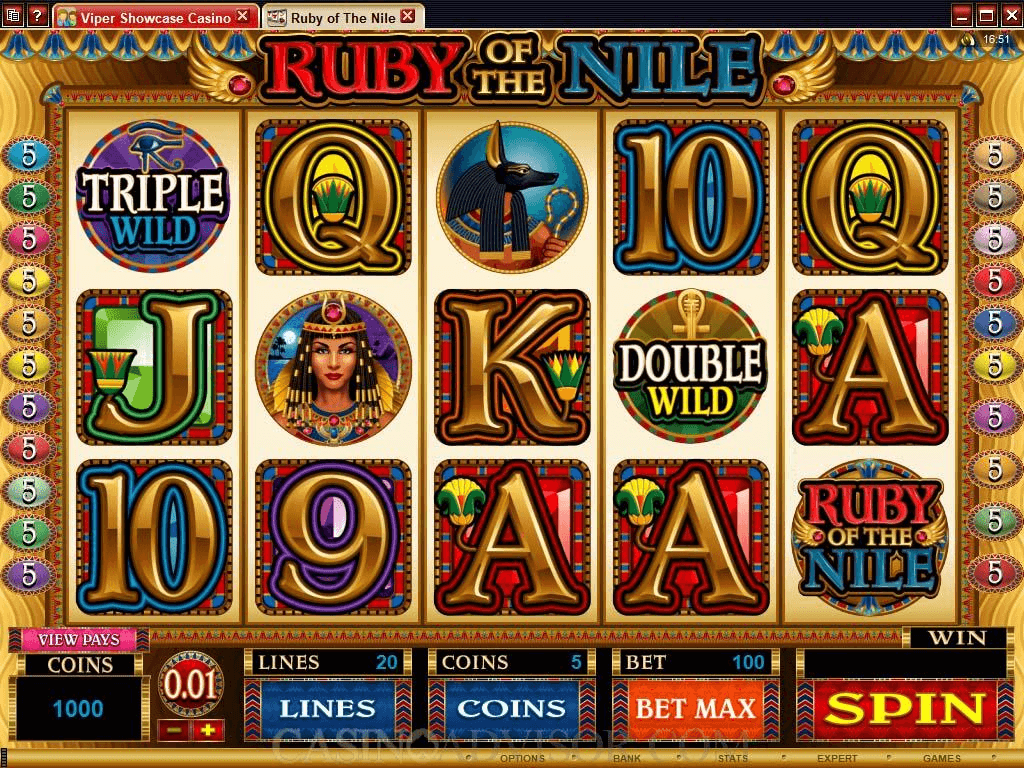 Ruby of the Nile is Microgaming pokies game that can be played for free  or with real money. With 5 reels and 20 paylines this game has some very low valued winning payouts on offer, but what makes it a great playing and potentially high paying pokies is that there are lots of different scatter symbols that can be spun in.

The structure of Microgaming’s Ruby of the Nile pokies is such that you have up to 20 optional pay lines that you can send into live play and you can also play a maximum of five coins per line on your chosen coin value settings too.

The base game jackpot is awarded when five of the logo reel symbols have been spun in, however as they are scatter symbols then as long as you have five of them anywhere in view, one on each reel you will win that base game jackpot, which for reference is 100 times your staked amount on the spin they spun in on.

There are some special Wild Multiplier symbols and you can also trigger a set of free spins too when playing off a base game spin, so there is a lot going on whenever you do play this pokies online.

Bonus games are both Double and Triple Wild Multiplier symbols in play on the reels of this pokies game, and as such when you get a Double Wild symbols helping you form a winning combination the associated payout is doubled in value, a Triple Wild Multiplier symbol in any winning combination will triple the value of that payout.

The bonus game you will want to trigger when playing the Ruby of the Nile pokies game is a very unique and unusual one, much more so in regards to the way that is it triggered and awarded to you. To trigger that bonus game you have to get the Treasure Chest bonus symbol landing on the middle reel position on reel number five!

When you do manage to spin in the Treasure Chest bonus symbol on the middle position on the last reel then you will be awarded with a random number of free spins, up to 20 free spins can be triggered via that bonus game initially and they all play off with x2 multipliers in play for the duration of your awarded free spins!

That Treasure Chest reel symbol is also in live play for the duration of the free spins game, and as such you can be awarded with additional free spins and re-trigger the free spins feature game when it lands on the middle reel position of the last reel when you are playing off any one single free spin. The maximum you can win in this game is 75 coins.