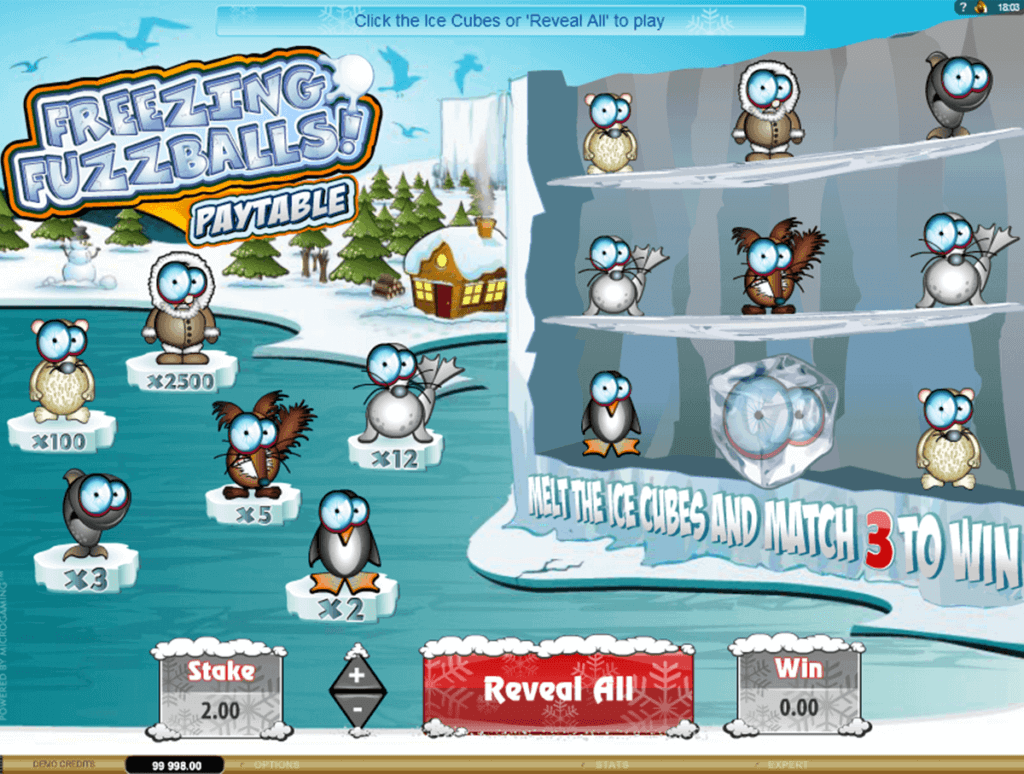 Freezing Fuzzballs scratchies is an online Scratch Card game created by Microgaming. It is a winter themed game where you can bet from 50 cents up to $10 and can win Max up to $25000. This game has great animation where you need is to collect three same figures and take your money! Penguin symbol will increase your money in x2, Fish in x3, Rodent in x5, Seal in x12, Polar Bear in x100 and Eskimo it is the most expensive sign, which can multiply your winnings in x2 500.

The Game Theme and Symbols

The scratch card game Freezing Fuzzballs was designed against the backdrop of a winter wonderland environment where the temperatures are always below freezing. The graphics on this particular card are both refreshing and clear. From the ice lake to the game-playing matrix, everything is designed to provide the player with a little chill and thrill at the same time. So this means the game theme is ser in a winter time where you will find, six whimsical characters are frozen in a block of nine ice cubes. The characters include a fish, a penguin, an Eskimo, a seal, a baby polar bear, and one character we simply can’t identify but makes us laugh every time.

As said above among them there is even an Eskimo, who is expanding our understanding of the capabilities of the human body. You will need to break the ice and find three identical characters. In this case, you will get the guaranteed prize.

Each character has their own multiplier. Click or tap on each of the ice cubes to reveal the characters as the ice melts. You have to thaw out three matching characters to win. The multipliers range from 2x for the penguin to 2500x for the Eskimo.

The game’s possible multipliers are as follows: X2, X3, X5, X12, X100 and X2500. The game’s minimum wagering requirement is $.50 up to a maximum wager of $10. If the player wagers $10 and lands the three x2500 multiplier fuzzballs, they win an amazing game high payout of $25,000. After the completion of each game, the player has a next game bar at the top of the game that allows them to move quickly to the next games.

How to play and win?

You need to join any friendly online casino to play this game for free or with real money.

You can play on your mobile, PC or tablet.

The game is allowed to wager from fifty cents to ten dollars.

Bonus payouts are not provided in Freezing Fuzzballs.

There are shelves in the game grid with nine ice cubes. Scratch the ice cubes to reveal which fuzzball is frozen inside. Match three to win the prize associated with that character.

Press the +/- button to raise or lower your bet, then press New Card for a new game.

The game’s objective is to scratch off the ice blocks to expose each of the spots. If the player lands three of the same fuzzball creature, they win the amount of their wager times the applicable multiplier. The player has the option of scratching off one spot at a time while generating excitement, or taking the quick route of having all nine spots exposed at the same time.

There are no jackpots, no bonus games and no bonus payouts. Freezing Fuzzballs is entertaining enough without a bunch of additional whistles, horns and bells. This is a simple scratch card game that even beginners can play for free until they get the hang of it, while customizing the stakes attracts high rollers who want to test their destiny and luck.

One more thing that’s absent from Freezing Fuzzballs is music. The only sound you will here during the game is a “bloop” as you tap on each ice cube to melt it. But that seems representable as in instant games like scratchies the music has little role to play.