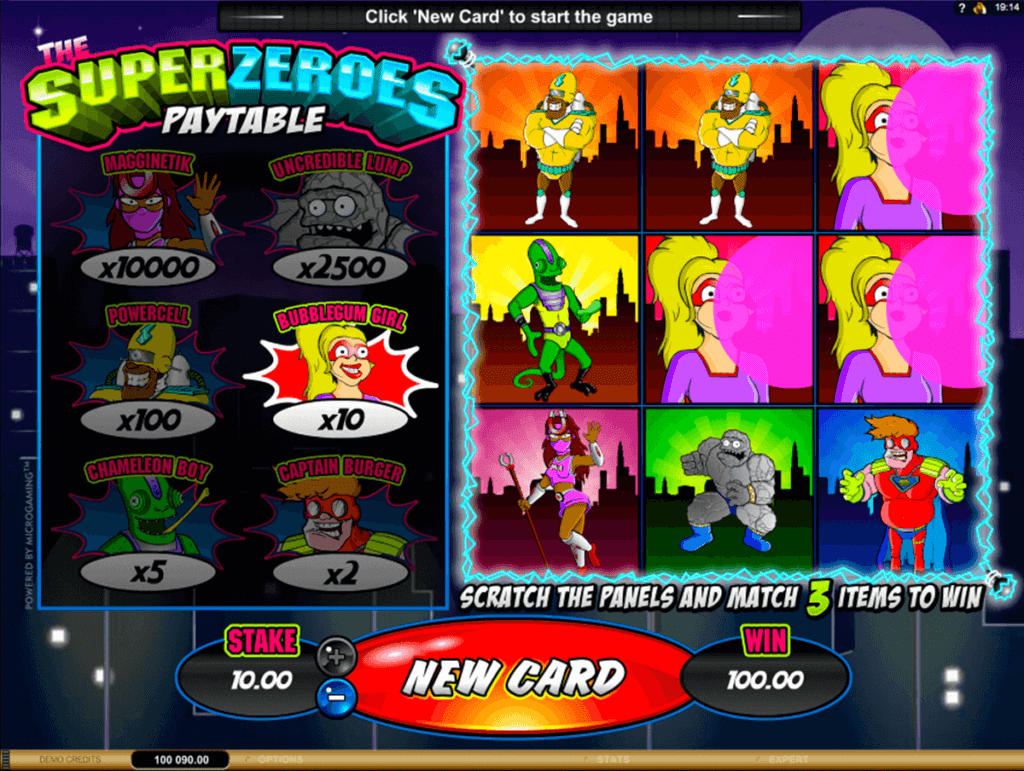 Super Zeroes is Microgaming online scratch card games that can be played instantly. Super Zeroes is based on cartoon themed heroes at the backdrop of perfect evening landscape of New York.

Super Zeroes is a superhero themed instant scratch game with a comic twist. The game symbols featured in Super Zeroes are Magginetik, Uncredible Lump, Powercell, Bubblegum Girl, Chameleon Boy and Captain Burger. Each of the symbols will become animated with sound effects when you win using that symbol. Each character has a unique coloured background, which gives the scratch card a bright and engaging look. Here is a screenshot of the Super Zeroes instant win scratch card:

You can play this scratchie game at any Microgaming powered online casino for free or with real money.

How to play super zeroes scratchie?

You can play super zeroes with your mobile, PC or tablet. Simply find the game on the games lobby and and click to play.

When the game loads you will see the two-part monitor. The left side will tell you about the money amount you can get, collecting certain symbols. Like, the captain burger  will pay you x2, chameleon bot  x5, bubblegum girl  x10, power cell  x100, uncredible lump x2500, magnetic  x10000! After pressing the “New Card” button it will be possible to reveal all of the presented symbols by yourself or with the help of the “Reveal all” button. To get your winning, you should collect three of the same symbols.

The objective of the game is to reveal three spots that contain the same super zero in order to win the applicable multiplier times the amount wagered. If you are not patient then you have the option to override the scratching off of a single spot at a time by hitting the reveal all button, which exposes all nine spots at the same time. If you are lucky enough to expose two winning combinations on the same card, you will only be paid the highest award.

The game comes with six different “super zeroes” that form the basis of the game’s six different multipliers. As mentioned above the super zeroes with their applicable multipliers are listed on the left side of the game-play screen as follows: the redheaded Flash looking guy – 1X, the alien looking lizard – 5X, the buxom blonde super babe – 10X, the yellow football player with helmet – 100X, the gray rock guy – 2500X and the purple clad super babe – 10000X.