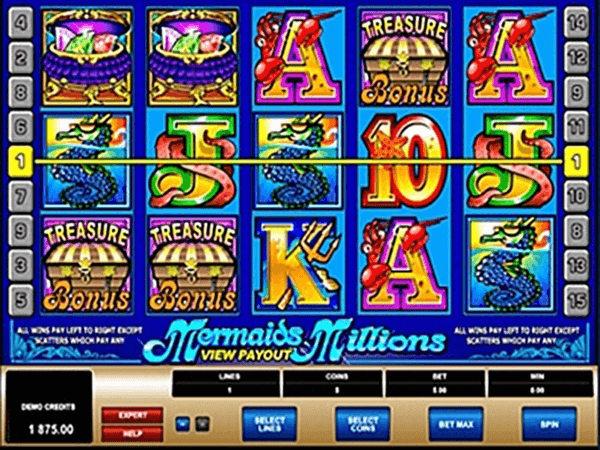 Mermaid Millions is a beautiful pokies games from Microgaming which has 5 reels and 15 paylines to play. This pokies is themed on Marine life and on a beautiful Mermaid. You can bet as low as a cent and the maximum bet in the game is $75, and it seems incredibly high, but if you win, you will get the fabulous prize. In the game you will see a lot of beautiful symbols that usually adorn the seabed, but here they will decorate the game and bring into it an element of luxury: a treasure chest, a shell with a pearl, a cool sea horse in sunglasses, a crab embracing the letter A with, the letter K with a trident, the letter Q with pearls, the letter J and numbers 10.
Neptune is the wild symbol icon and it will help you in the case of a need. Each Neptune’s appearance will be desirable. Especially if the win is near. Being a wild symbol, it will replace all other symbols, except for the scatter and bonus symbols. The treasure chest symbol serves as the scatter.
The little mermaid serves as the scatter in this game. Appearing at any position on the reels, she will bring gifts. The size of the prize will depend on the bet. The little mermaid can also trigger free spins, so her generosity is unbounded!
The game has a free spins bonus round. Three, four or five mermaid scatter symbols trigger the bonus free spins option. Any payouts that you can be got in the bonus game are multiplied by three. In addition, if during the bonus game the bonus option of free spins appears again, extra spins are added to the previous ones, and the bonus option will be restarted. You can not change the bet size and the number of paylines in the bonus free spins round.
The game has another bonus round that can be activated when three, four or five treasure chests will show up on the reels in an active line. During the bonus round, you will find yourself at the bottom of the sea. Large shells and treasure chests would be given to you as gift, but it is allowed to choose only three of them, if the bonus round is triggered by three bonus symbols. If there are four or five such symbols, the size of the prizes increases, respectively. The maximum jackpot of this game is 7,500 coins, or 37,500 dollars.