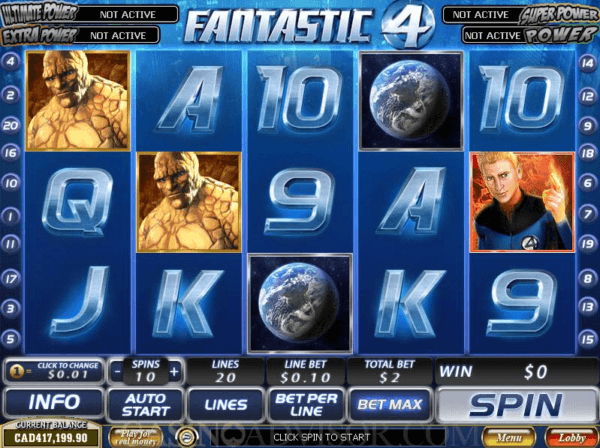 Fantastic Four is online pokies developed by Playtech. This 5-reel, 25-payline video pokies game is based on the characters from Marvel comics and the 2015 20th Century Fox film offers many exciting bonus features and gives you the chance to win the 10 000 coins jackpot.
In the Fantastic Four pokies game you will be able to see symbols of our four super heroes, the Earth and logo icons together with A, K, Q, 10 and 9 symbols.
This is a progressive pokies united by the four different types of Marvel multi-level mystery progressive jackpot. The five Wild symbols of the Fantastic Four Game Logos can award you with the game base jackpot. In addition to the Wild symbol with its traditional functions, there is also the Scatter symbol in this pokies. This is the image of the Earth and at least three of these symbols will open for you the amazing free spims feature with four fantastic features. The initial number of free spins is 12. However, all, who see one of the main heroes on the whole 3rd reel, will get the access to the certain bonus feature. In the Mr. Fantastic feature you can get 4 extra spins and the Mr. Fantastic icon as the Expanding Wild. As with pokies very often free spins in the games are combined with the multiplier feature. You can get 4 free spins and the symbols of the Invisible Woman as the multiplier increaser in the Invisible Woman feature of the Fantastic Four online game. You can also play the Human Torch feature with 4 extra spins and the sticky 1st reel or the Thing feature with 3 extra spins and the Thing symbol as the Freezing Wild.