Jackpots are lucrative as who doesn’t want huge bucks in their pockets. Each year there are so many winners stories from Australia as well as New Zealand where players have won casino jackpots. In 2016 a New Zealand man named Rawiri Pou won a giant jackpot of NZ $10,144,395.82 playing the Mega Moolah Progressive pokies. 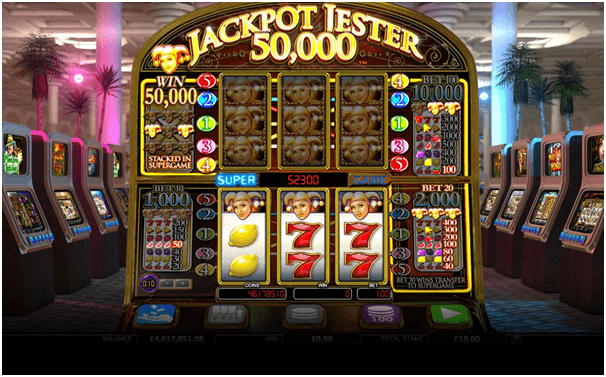 At online casinos there are lots of pokies games to play. Some carry small jackpot prizes and other have huge casino jackpots. Progressive casino jackpots are those pokies machines that have a jackpot that increases incrementally as players play the game. These can be standalone machines, where the jackpot increases on just that one machine, or they can be networks of machines, where the jackpot increases across the entire network.  These networks can be proprietary to the casino, or they can be networked across multiple casinos.  The games take a tiny percentage of each bet to “fuel” the jackpot, which enables the jackpots on these games to become far larger than you’d find on other pokies machine games.

Jackpot Meters shows the current value of the Casino Jackpots 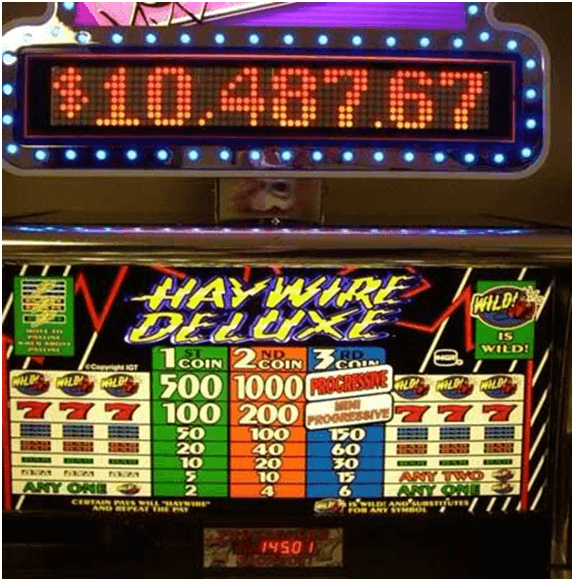 One feature that all progressive pokies share is a jackpot meter, which shows the current value of the jackpot. The meter is almost always large, brightly colored and located above the pokies machines. You can literally watch the size of the jackpot grow as gamers plunk their coins in the pokies Online pokies machine games also have jackpot meters, and you’ll find them inside the actual casino software itself. You’ll also see these jackpot meters on various informational online sites that promote these kinds of games and casinos. 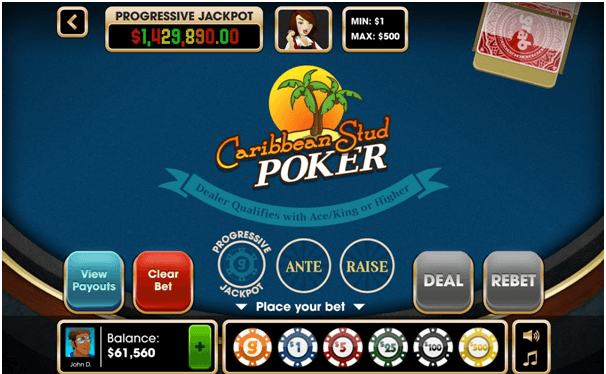 With progressive video poker machines, you can actually determine the break-even point for the game. Video poker games offer known odds, since they simulate an actual deck of cards. Like, you can expect to see a royal flush approximately once every 40,000 hands. If the progressive jackpot gets high enough, the game becomes a positive expectation wager, which is rare enough to find in any casino.

You’ll even find some blackjack games with a progressive side bet available. One of the more popular of these is the Triple Sevens Blackjack game from Microgaming. In this game, if you’re dealt three sevens of diamonds, you win the jackpot. Other combinations of sevens result in smaller prizes, too. These kinds of games are found in land-based casinos throughout the world, but the payout varies. They all have one thing in common though the side bet is a requirement to win the progressive jackpot.

In poker rooms, a bad beat jackpot is often available at certain tables. This often changes the texture of the game, because some people will stay in with hands that they might otherwise fold, all in the hopes of sharing in the jackpot. Bad beat jackpot tables take an additional amount in rake in order to fund the prize pool. The jackpot is won when someone has a really strong hand that’s beat by an even stronger hand, which is obviously a rare occurrence. 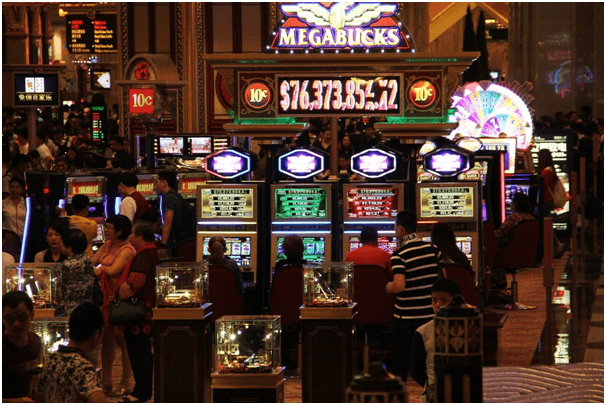 Many lotto games like Megabucks is a brand name which is the most famous progressive jackpot game in the world. Megabucks is powered by IGT gaming software where the casino jackpot starts at $10 million  and grows from there, and it’s been known to get as high as $39 million before being hit. Like most lottery jackpots, winners of a Megabucks jackpot can choose to receive a lifetime annuity or a cash payout.

It is not only pokies that have casino jackpots but also Instant Scratch cards at online casinos have big jackpots to win. Recently Lottoland a UK online casino launched a scratchcard with a top prize of $10 million up for grabs. The bumper jackpot is the largest windfall punters can win on a scratchcard anywhere in the world.

Here are few of the instant scratchies casino jackpots games you can play at any NZ or AU friendly online casino and win big. 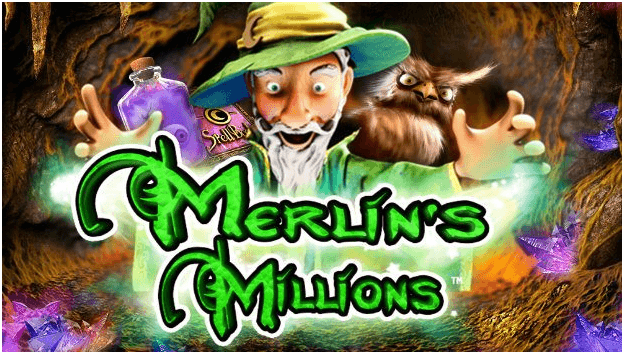 King Arthur’s trusty wizard looks to cast his magic over your day and guide you to good fortune with this fun and colourful online scratch card. With Merlin’s Millions, players can choose to bet between $0.20 and $200, with the chance to win the jackpot of $250,000. You just need to scratch nine panels away and hope to reveal three matching symbols.

One of the best reasons to play Merlin’s Millions, apart from the high RTP of 95.17%, is the fact that you can win more than one prize on any given card. 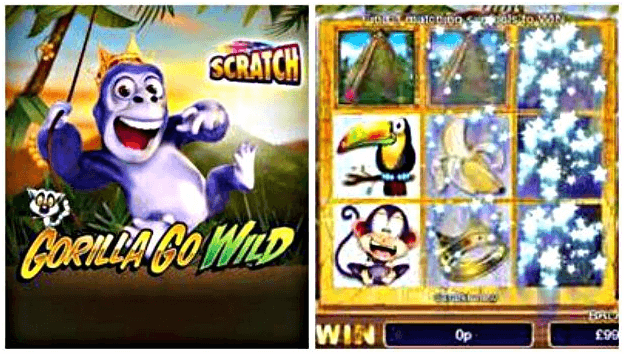 Gorilla Go Wild brings a cartoony jungle theme to this online scratch card, featuring a bounty of animals as symbols including a toucan, a monkey, and a lemur, along with the titular gorilla. Players can place wagers from $0.30 up to $180, with the chance to win 1,000 times the initial stake, and with an RTP value of 95.43%, there are strong odds of winning.

If you strike three bananas or lemurs, you don’t win anything, but three matching toucans will start you off with five times your bet, the monkey gives 10x, an Aztec coin 50x, a crown 100x, and uncovering three gorillas hits the jackpot. 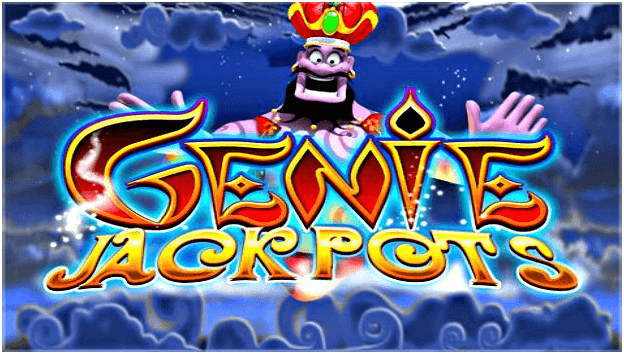 The Genie Jackpots online scratch card is tied to the online pokies of the same name. Both games can trigger the Vegas Millions progressive jackpot game if players uncover the letters spelling out V-E-G-A-S. In addition to the main game, which has a high RTP value of 95.82%, there is also a Treasure Chest bonus round, where the Genie reveals his treasure room, and strikes the treasure chest with his mallet to open it.

You can win whatever amount appears from the chest, but it doesn’t end there. You’re then invited to choose one of three lamps. Pick the correct one that the genie is hiding in, and he will have another strike at the chest. This can continue until you reveal a Collect symbol.

Another online scratch card that offers an RTP value of 95.82%M, Pig Wizard features a hilarious 3D pig practicing magic in starry robes, who is also the highest symbol in the game. Revealing three Pig Wizards will win 100x your initial bet. Like Genie Jackpots, it is also tied into a V-E-G-A-S progressive jackpot.

Landing three bonus symbols will trigger another game, where players roll a die and move around a game board, collecting additional prizes and multipliers along the way. However, try to avoid the curse, or the bonus game will be over. 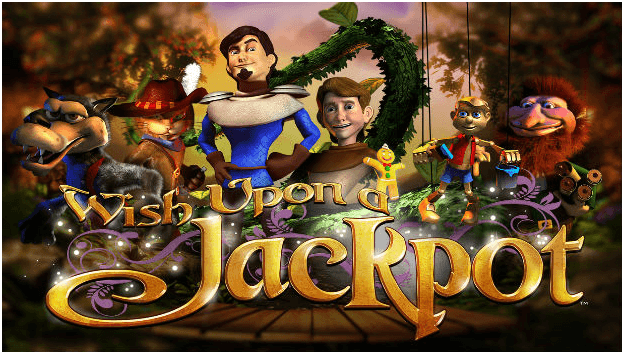 With one of the highest RTP values, sitting at 96.06%, the Wish Upon a Jackpot online scratch card is a Shrek-esque adventure into the world of fairy tales, featuring symbols such as the Frog Prince, Puss in Boots, and the Gingerbread Man. Players must scratch away the magical orb panels to try and reveal three of the same icon. The game also features two bonus games to add to the excitement.

The first ties into the tale of Jack and the Beanstalk, where players match up symbols on a pokies machine. The second is triggered at random, when your Fairy Godmother appears and casts her wand over the scratch card, conjuring extra matching symbols for bigger cash prizes.

How to win Casino Jackpots? 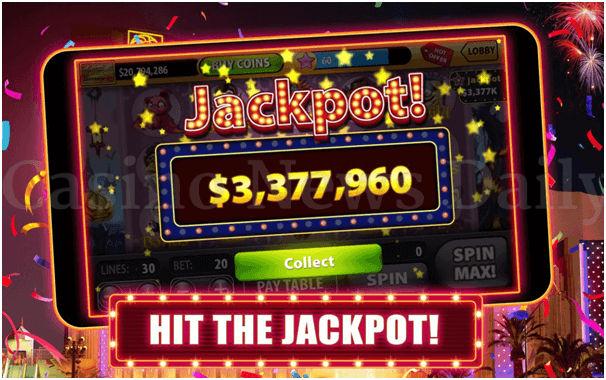 To win Casino jackpots there are few things to keep in mind.

If you are playing pokies casino jackpot machines then know the fact that they are game of chance and no skill will make you a winner unless luck is on your side. But there are few factors that can make this happen and one of them is to bet maximum. So when playing progressive jackpot pokies games you have to make the max bet in order to be eligible to win. For smaller jackpot pokies games it is not always necessary that you play max coins on most pokies machines, but don’t play a progressive if you’re not going to make the max bet. You can’t imagine the frustration you’ll feel if you win the jackpot but get a smaller payout because you didn’t make the max bet.

2. Go for smaller jackpot games if you are a newbie

As a new player your best chance of winning in the short term would be to pick games that have the smallest jackpots. The smaller is it, the easier it would be for you to win, boosting your chances of walking away as a winner.  On the other hand, the bigger the jackpot, the harder it is to actually hit it and you will end up losing a huge portion of your bankroll unless you’re careful. Also it would take many long hours of playing to create those big jackpots, so this is why you have little chance of hitting a big jackpot. Though it’s not impossible, but if you want better odds and chances of hitting a win, going after a smaller jackpot will give you just that.

Many online casinos will have a separate section for scratch card games. Players are attracted to them for their simplicity and speed of play. They can be played repeatedly in quick succession, or between other games, like suppose you are waiting for table at a live casino. These games though look simple and easy that can be played within minutes of time but they also carry big bucks to win. One great feature that most scratch cards have is the ability to reveal all, saving you time by not requiring you to scratch the individual panels away. However, the best way to determine how easy a scratch card game is to win is to look at its theoretical Return To Play (RTP) value. This percentage is not a guarantee, but a good guide as to how often you can expect to win. The higher the RTP, the higher your chances of winning.

4. Know the paylines and the cost of pokies games

Also you need to look at the paylines and the cost in pokies game. Whether you are playing online or at a land-based casino, paylines are all that matters in the pokies game. A common mistake many newbies tend to make when starting out, is to only consider paylines when it comes to building a winning spin or to calculate the total of coins won. In actual fact, paylines affect the calculation of the pokies game’s actual cost. So, if you are playing a 25-payline pokies  game and you are placing a bet on only 5 paylines, you can forget about hitting a large payout or snapping up a jackpot as your chances and odds are drastically decreased. Also although maximum betting is your best chance of snapping up big wins, you need to remember that it’s also going to cost you a lot more than going after a more modest win.

Choose pokies games with excellent bonus rounds. Bonus rounds as well as multipliers, free spins and wilds, can do a lot for your bankroll, whilst also increasing your chances of winning a jackpot by adding to your spin count. You must make sure that the pokies game of your choice offers these bonuses, regardless of whether you are playing a maximum bet or not. Even if you are playing a machine with a small bet, multiplying your wins through these value add-ons can increase your bankroll. Thus reading reviews about a pokies game before playing is more important to understand the game. Make sure that the pokies game benefits from free spins, multipliers, wilds and scatters. All of these small features contribute towards your winnings when hitting a combination.

Finally an important advise to  casino jackpot players. Always stick to your bankroll when playing casino games and do not chase jackpots and be frustrated if you lose. Play responsibly and have control on your budget and stay positive one day you might win Casino Jackpots too.