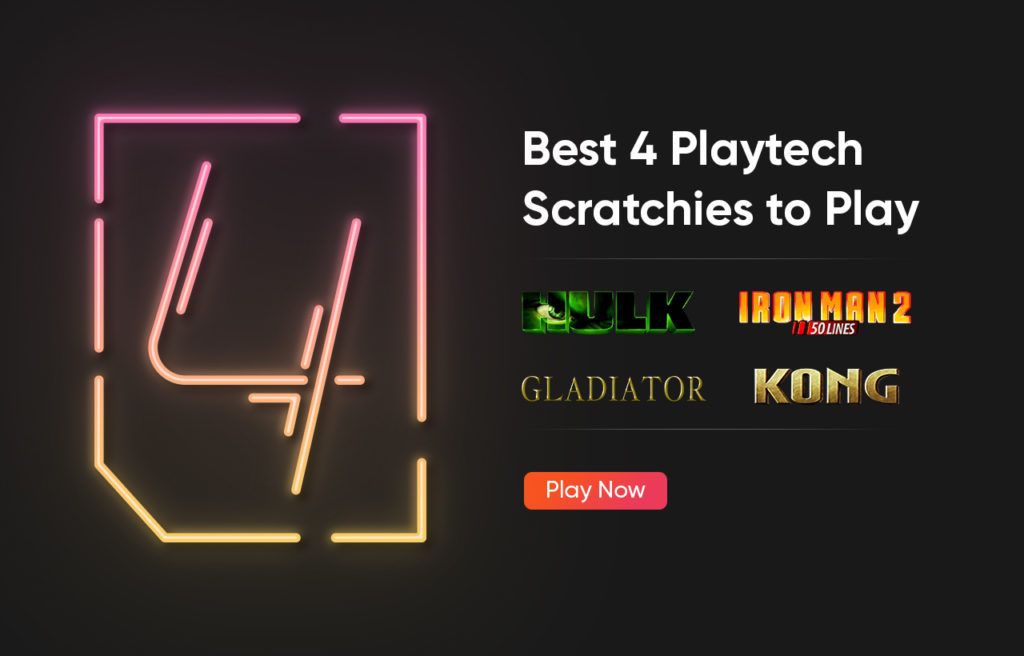 Most of the Playtech scratch cards are inspired by popular pokies earlier introduced and then each time the scratch card game is released at a later date.

You can find nearly twenty scratch games from Playtech. They could be regular, branded or even progressive. The branded ones could be classic titles from the pokies category, such as Daredevil, Top Trumps Celebs, Ghost Rider, Iron Man 3, Avengers, Spamalot, Wolverine, Top Trumps Football Legends, Captain America and The Six Million Dollars Man.

Here are the most popular and best Playtech Scratchies!

1. Kong: The Eighth Wonder of The World

This pokies game from Playtech is themed on the story of the film King Kong the tale of a huge ape who is lifted from his native island to live in New York.

It is a five reel, twenty payline pokie machine and is amazingly designed to emulate the jungle environment of King Kong’s island home and also 1930s New York City.

This scratchie has symbols like 10, J, Q, K and A and the special symbols include Carl Denham, Jack Driscoll, Ann Darrow, and Captain Englehorn characters. King Kong is the wild card and Kong Logo as the scatter symbol.

You can play Kong scratchies in two modes – Jungle Mode and Big City Mode. You can get Wild Jungle Respins as bonus feature which activates on landing three or more wild symbols while in Jungle Mode. You get free spins every time you land a wild.

Three or more scatter symbols will trigger the Skull Island bonus and you will be transported to an island where you need to choose from a number of spots.

Getting three wilds will earn you the Wild Kong Respins. On landing three scatter symbols, you will get to the City Tower Bonus where King Kong is perched on the top of the Empire State Building and three planes heading towards him. On destroying each you can win a cash prize.

The symbols include Kong, many characters from the film, dinosaurs, the game’s logo, and more. They don’t have fixed values, rather a random amount is assigned to each card. As a result, they can all land you huge wins.

The game has an ‘Autoplay’ feature also. You can select the number of cards you want to play and hit the play button and watch the cards reveal themselves and the wins come in.

Although these games are simple but they can provide you with hours of entertainment and masses of winnings.

The amazing Hulk pokies Machine is one of the most popular pokies machines you can find online. With 20 paylines and 5 reels of gaming action, it is inspired by Marvel comics.

It is an affordable game for everyone to play. You can play it for little as 0.01 credit per line up to 5.00 credits per line!

The most amazing part of this game is its scatter bonus, where you can win 10 and 100 free spins while benefiting from a 3x multiplier! The Smash Bonus feature gets triggered on landing the ‘smash bonus’ icon on the first and fifth reels.

This scratch card, also known as The Incredible Hulk, is based on the hugely popular 50 reel slot machine game. It offers an instant win even has a special bonus round for players to enjoy. You can win massive amounts of money in this scratch card.

The Hulk scratch card is one of considerable gambling ranges. You can decide to stake anything from as little as 0.20 per scratch card, up to the maximum stake of an absolutely destructive 500.00 in a go. The auto play feature allows you to play consecutive cards in a row if you want, but that doesn’t have to be used.

This game is inspired by the successful Iron Man movie and it can be played for free or with real money. This Marvel-based Playtech video pokie features 5 reels and 25 paylines with symbols inspired by the 2010 Hollywood film. You also get here two types of jackpots the Marvel and the basic one.

Iron Man 2 is a progressive pokie with no download game. You can play it with your mobile instantly.

There are six symbols including Iron Man in red and green ammunition and four different robots. You will get to see a girl, T. Stark, and a villain.

The image of Medallion with the Eagle is the Wild symbol which has acts as a jackpot icon and five of them can win for you the 3 000 coins prize. The Logo of this casino game is the Scatter symbol. On landing 3 scatter symbol you activate the very lucrative free spins feature. You get the opportunity to play 10 free games with the increasing multiplier the figure of the multiplier will increase after every two spins reaching up to the 6x number.

It offers an excellent, polished experience. The graphics are crisp, most images are inspired by the movie, and the sound effects enhance the experience without grating on you.

The legendary fight of gladiators is the theme of this pokie which has 5-reel, 25-payline video pokies. It has characters of the film in the role of reel symbols and offers lucrative bonus features. Its jackpot offers 5000 coins.

The Gladiator Helmet is the Wild symbol and landing three of them activates the Gladiator Bonus game. In this bonus round you will have gold, silver and bronze bricks and on clicking 9 of them and get your coin prizes.

The image of Coliseum is the Scatter symbol here and landing three of them will open the Coliseum Bonus for you.

The color scheme has a golden hue, and the stage is set again in the coliseum and setting sun. All characters are lined up along the left side. This is the pay chart, and it will display how much each icon is worth in the event of a win. The playing board is set to the right of the screen, with the star of the show standing bold and brilliant on center stage, weapon ready to hit.

These are the most popular and widely played Playtech Scratchies that you can play from Australia visiting any casino or even online on your smartphone.