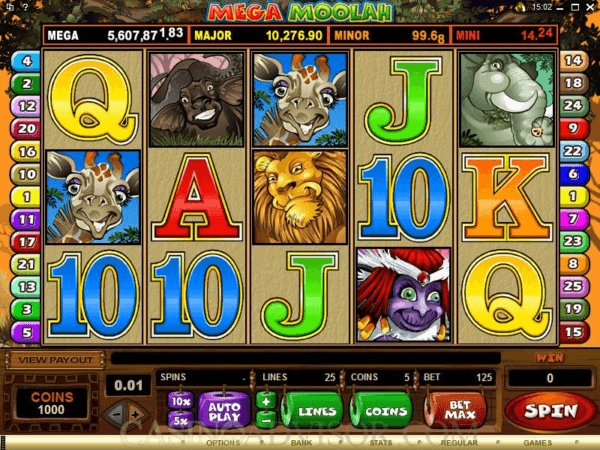 Mega Moolah is the most popular pokies game from Microgaming and is widely played across the globe because of its over $1 million progressive jackpot. You cannot play this game for free but can play it with real money even with your mobile at Microgaming powered online casinos. It has 5×3 reel game with 25 paylines where you can bet with coins up to 5 coins per pay line. The Mega moolah coins range from $0.01 to $0.05.

Apart from high-value symbols, these are savanna-related animals that designate special symbols in Mega Moolah like the Wild icon unsurprisingly turns to be Lion. Two such lions on your active pay line will present you with 15 coins, if you get three Lion icons your reward will be 125 coins, while four such symbols pay 1500 coins. Also if you are lucky enough to get 5 lion icons in Mega Moolah you win 15,000 coins.

Besides that, Lion substitutes any other symbol to complete any combination while doubling your winnings being the most desirable icon to appear on the payline. Another animal worth to be looking for is Monkey which plays the role of the Scatter symbol in Mega Moolah. If at least two Monkeys are scattered at any reel of the game they can substitute the needed symbol at your pay line, while three Monkey icons trigger the Free Spin Bonus with your winnings tripled in this case.

Also find Mega Moolah jackpot wheel that people win unfathomable sums of money. It is triggered randomly but your chances are significantly higher when you increase the size of your bets. There are four types of Mega Moolah progressive jackpot that you can win at this wheel.