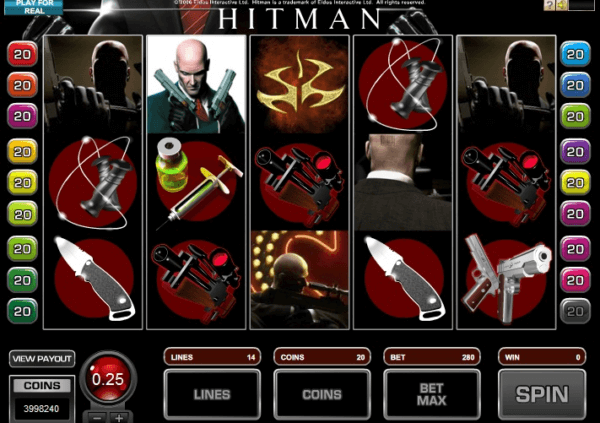 Hitman is the Microgaming video pokies with 5 reels and 15 paylines. This game offers some awesome bonus features and very high wins and you can win jackpot upto 4 000 coins.

The Hitman pokies game is themed about the killer Hitman and all, where you can see Hitman in action.  On the reels of the Hitman online pokies you will see only theme-related symbols, which will look great on both computer and mobile screens, because Hitman is also one of mobile pokies free games to play also. So, reels symbols are: Hitman with the gun, two other images of Hitman, dollar banknotes, guns, rifles, syringes, knives and jumping ropes together with four special symbols as described below.

It is natural that the Wild symbol of the game is the Hitman image. However, it is not the simple Wild icon with well-known functions, but the Expanding Wild symbol. The Hitman Wild symbol will expand, when it is on reels 2, 3 or 4 to make more winning chances for you.

In addition to this, there are three other bonus games in the Hitman pokies. The first is the Contract Bonus feature, which activate three and more Computer Bonus symbols. You will need to choose the target and the weapon and get coin multipliers for your choice. The next is the Insignia Bonus, which you can play, when 3+ Insignia symbols appear on the reels. This is the Pick Me game, which is frequently found in many free games video pokies. Here you will get immediate cash prizes after choosing one of three insignia objects. Also the three and more ‘18’ symbols will activate for you the bonus round with 18 free spins at the 2x multiplier of all wins. In general, all these bonus features of this game can add to your account up to 270 000 coins.