How to play and win the new $5 Monopoly Instant Scratchie in Australia? 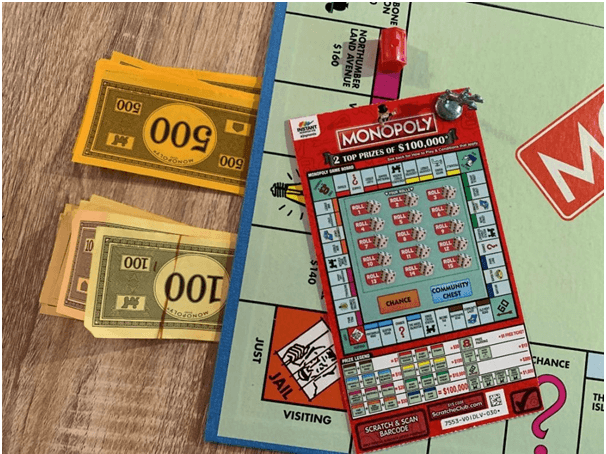 The Monopoly Instant Scratchie is the new scratch card game for Aussie punters to enjoy and win prizes worth AU million. This newest edition of Monopoly game costs AU$5 only giving you the chance to play for real money with two top prizes of $100,000. Monopoly Instant Scratch-Its game would appeal to those who loved the classic board game but wanted the chance to swap monopoly money for real money.

If you are nostalgic of the classic Monopoly board game that you played as a kid and remember how easy it was to fantasise about what you would do if the thousands of dollars of colourful paper money and the exclusive real estate you owned on the board was real, then this game of similar theme will surely attract you. With a one-in-four chance of winning on this ticket and a total of 620,000 prizes up for grabs, you could be one of the many players taking home a share of the $6.6 million in prize money available on this ticket.

With the $5 Monopoly Instant Scratch-Its ticket, you can roll the dice and take your chance at the community chest to your heart’s content without having to share as you did in the old board game.

How to play the new $5 Monopoly Instant Scratchie in Australia?

There are two Top Prizes of $100,000 and $6.6 Million in prizes to be won. Pick up your favourite Instant Scratch-Its tickets at your nearest retail outlet and enjoy the thrill of playing for a chance to win cash prizes!
There are three Ways to win – Collecting the properties to win in the Prize Legend. Chance and Community Chest and you can win up to 3 times. Chance of winning the top prize is 1 in 1,100,000 for the $5 Monopoly ticket and the highest amount that can be won on this ticket is $100,000.

Also there is a second chance to win if you didn’t win a prize on your Instant Scratch-Its ticket.

How to claim prize on winning Instant scratchies?

For prizes $1,500 and over simply complete their Prize Claim Form and enclose the winning Instant Scratch-Its ticket, remembering to keep copies for your own records. Affix a postage stamp and mail to: ADMINISTRATION, Locked Bag 7 COORPAROO DC QLD 4151

Your prize payment should be processed and paid within 10 working days of receipt of your claim form by Golden Casket, or after necessary waiting periods as listed. Remember to write your name, address, postcode, telephone number and signature on the back of your winning Instant Scratch-Its ticket.

How to get second chance draw in Instant scratchies?

Scratch eClub offers you the opportunity to enter your eligible non-winning Instant Scratch-Its tickets in a monthly second chance draw, as well as automatic entry into a monthly birthday draw!

The monthly second chance draw has varying prizes each month. All you need to do is: Register and become a ScratcheClub member; Select the non-winning ticket(s) you are entering into the draw (you can enter more than one ticket at a time) Hang on to the tickets entered as you must produce the ticket to claim a prize should you be a winner.

Instant Scratch-Its tickets have evolved over the years and today there are many different tickets at various price points to cater for every type of player. You can join the he Scratch eClub online that has been developed to reward loyal customers with Monthly Second Chance Draw with varying prizes each month.
Also registering for the Scratch eClub automatically enters you into the birthday draw, giving the chance to win the monthly birthday draw that is relevant to your month of birth! If you are the monthly birthday winner you will receive a birthday gift from Instant Scratch-Its. You must produce photo identification to claim a prize.